Posted on November 26, 2011 by Bruce Meisterman 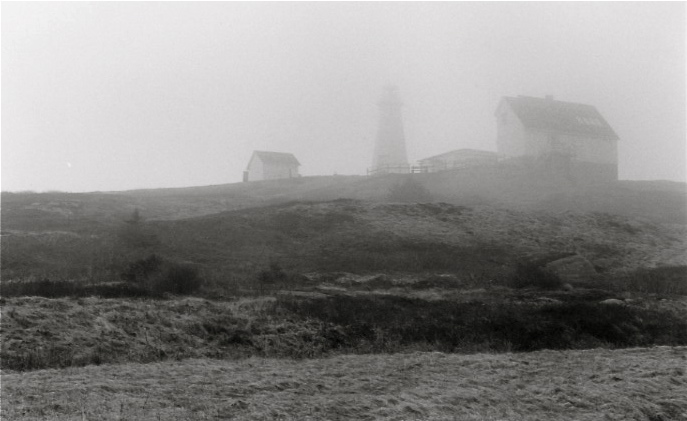 During my research, I learned about Cape Spear being the eastern-most part of the North American continent. It’s actually closer to Ireland than to other parts of Canada. I think there is a certain Newfoundland pride in that fact.

This is where the sun shines first, (remember 2.5 hours ahead of Central Time), on the continent each day. When it shines. It gets a jump on the day before most of us are even considering getting out of bed. On the other hand, some of us might just be getting in. After all, the night life goes on long and strong in St. John’s. The day I visited was socked in pretty good with fog. Have I mentioned I really love the fog? (11.14.11 post). Down in St. John’s that morning, it was sunny and pleasant. The drive up to Cape Spear (only 9 miles) was different: very foggy and a good deal colder. Arriving, there was a real visual sense of foreboding. The fog changed everything.

It was much colder because of the fog. The sea roar sounded a lot louder as well. And the wind was anything but gentle. But the piece-de-resistance was the optical illusion the fog created. Getting out of the car and approaching the cliff, the sea appeared to rise vertically behind the lighthouse. It was as an actual seawall was towering before me. Coupled with the amplified sound of the sea, a buffeting wind, and the colder temperatures, this was an incredibly sensual yet disconcerting experience.

Sharing geography on Cape Spear is an old World War Two artillery battery housing two ten inch guns constructed to protect St. John’s harbor. The guns have been neutered but still, silently, are on eternal watch duty. Connected by underground tunnels it would be easy to imagine the soldiers huddled against the cold at their posts. The tunnels show the wear and tear of time and weather and are just waiting to be used in the next M. Night Shyamalan film. In the mercurial light and patterns of the fog, one can almost see the ghosts waiting, listening, ready. What tricks of the eye did the fog play then?

One thought on “Ghosts of the Battery.”