For a lot of people, the idea of mummers is garishly dressed men in otherworldly and fanciful, often feathered outfits marching in a parade. Almost as if RuPaul had been on a bad acid trip. Making it worse is that it was usually held on New Year’s Day morning in Philadelphia. As if a hangover weren’t enough! 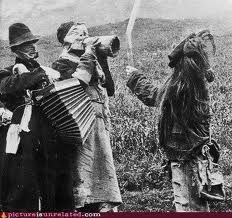 But as in Star Wars, these are not the Mummers you’re looking for. As opposed to the Mos Eisley of the aforementioned parade, the mummers I’m talking about are of a traditional kind. This mummer tradition dates back to the mid 1800’s originating mostly in Northern Europe. Since the book “Arn? Narn.” is about Newfoundland, let’s talk about their mummering tradition. It’s a hell of lot more entertaining. 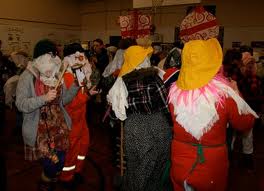 The names have been changed to protect the innocent.

In Newfoundland, locals would dress up, (a slight overstatement as anything that would fit on one’s person or over other garments would constitute a “costume”) and visit, well rather prey on other people’s houses. Once admitted in, they would generally carouse and torment (all in good fun of course), causing minor and sometimes major damages to that particular abode, usually drink all the legal adult spirits, and not leave until the hosts (read this as hostages) identified who the invaders were. Once that was accomplished, the mummers would then move on to yet another house and repeat their holiday mayhem. Sounds like fun doesn’t it? Unless yours was the next house to host such “festivities.”

The mummering tradition is immortalized in all sorts of folk art: from statues to drawings and paintings to song and story.Singer Loreena McKennit also sang about it in her haunting song “The Mummer’s Dance.”

In my travels while photographing Newfoundland, I became interested in the Mummer tradition. Not so much as to participate (the opportunity never presented itself and more’s the pity!), but as something I would like to remember as part of the Newfoundland experience. The closest I was able to get was in local art. One in particular caught my eye. The photo below are Mummer figurines produced by Pam and Cara in Newfoundland. They issue one new Mummer each year and they sell out pretty fast.

True confession: I even have a few of these. Does anyone know where I can get a curio cabinet cheap?

And in atypical fashion, as I am loathe to like anything that falls into a category loosely defined as tschotckes, I found myself charmed by these. The good news is that if you invite these guys into your home, they won’t cause any damage. And better yet, they’ll leave your liquor stash alone! That alone makes them better than most guests, right?