Posted on August 6, 2012 by Bruce Meisterman

It’s not like that all. We are still together and in love with each other, still! But for the previous three years, I’d been carrying on an affair, right out in the open, thank you very much, and I was still happily married.

For those out there with some prurient interest in where this is going, check out another blog. It’s not like that at all. I’d fallen in love with Newfoundland the moment I stepped off the plane to start the photography on what was to become Arn? Narn. I carried on this affair in front of my long-suffering wife, subjecting her to stories of wonderful people, incredible land, beautiful seas, marvelous skies, great music, etc. and still she didn’t kick me to the curb. No doubt there were times she probably wanted to, but discretion and propriety saved the day, for me at least. 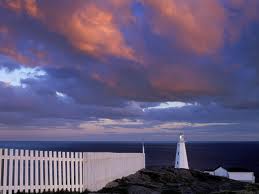 What’s not to love? (citypictures.net)

This was not your typical sleazy affair. There was no other woman. There was just this land to which I felt strongly attracted. If Newfoundland had been a person, yes, damn straight, I would have moved right in. I still feel that way. Yet, I loved (and still do) my wife. I won’t leave her, but I just might take her with me! Yeah, it’s that cool and my wife is down with that.

So, now as I drive Carla around the province, meeting and talking with locals, even dancing, kicking back to a new, slower tempo, she’s getting it. The land and sea are beginning to speak to her and she is responding. It’s now beginning to make sense. Earlier in this blog, I wrote about Gerard saying Newfoundland was “The Land of Low Anxiety.” It seeps into you. You know in your bones, your soul, it’s right. And now, so does Carla.

We fantasize about moving up there. We even casually look at real estate. Financially, it’s in our reach, but if it were to happen, it wouldn’t be in the near future, no, no, not the short term. It’s a dream at this point.

She has met my “mistress” and realized it is not a competition. It is meant for us both to share. And we’re just starting.