In my book, Arn? Narn., I document what has happened to rural Newfoundland because of the collapse of the fishing industry. That happened in 1992 and nothing has really changed since then. Reading the following article begs the question, “So why hasn’t anyone learned anything from that?”

This is from The Telegram in St. Johns, Newfoundland. As it says in the opening, those who forget the past are doomed to repeat it. 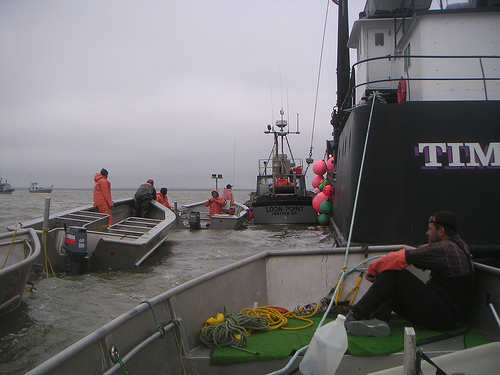 To paraphrase: those who don’t learn from history are doomed to mess the same things up all over again. And nowhere does that seem more obvious than in federal fisheries policy.

Most people in this province with any connection to the fishery remember the failure of cod stocks off this province, and the outcry over the fact that scientists had indicated the stocks were failing, but that the federal government went ahead and set higher-than-recommended quotas anyway.Well, a court case in British Columbia should make people wonder if the cod crisis taught anyone anything.The federal fisheries minister, Gail Shea, made a decision to reopen three herring fishing zones off the B.C. coast, and was promptly taken to court by five Nuu-chah-nulth Nations. The First Nations won their case after a federal court judge granted an injunction stopping the fishery — but what’s even more fascinating is the evidence that turned up in the case.One piece was a six-page scientific recommendation — agreed to all the way up to associate deputy minister David Bevan — that told Minister Shea the science showed the fishery should remain closed for conservation purposes.At the foot of the recommendation, the minister wrote a checkmark in the “do not concur” box, and added a handwritten note saying, “The minister agrees to an opening at a conservative 10 per cent harvest rate for the 2014 fishing season in the three fishing areas.”Her department says no, but the minister says yes. Hers was the only voice that mattered.Questioned on the court case in the House of Commons, Shea came up with the remarkably unbelievable “My decision to reopen the herring fishery in the three previously closed areas was based on the department’s scientific advice. In fact, the stocks in question were more than 7,000 tonnes higher than what science required for reopening.”

How much nerve does it actually take to be a federal cabinet minister, anyway? And could she have said the same thing under oath?

The House of Commons may have to accept that every member of Parliament is honourable when they speak. More and more, it’s hard to accept that concept: it’s also hard to ignore the similarities to an earlier case where Conservative cabinet minister Bev Oda slashed funding for international aid and blamed the decision on her staff. Documents cutting the funding surfaced, with a mysterious “not” added, effectively cancelling out a recommendation to fund the group.

But back to the case at hand.

If the federal fisheries minister cannot even be counted on to take the clear-cut advice given by experienced scientists — and then argue that she made her decision on the basis of science — why shouldn’t every quota decision be challenged in court, just as a matter of course?

At least that way Canadian citizens will actually know what the science says. After all, as has been made abundantly clear already, those scientists are gagged and unable to talk about their research under the current administration.

Clearly, decisions in the fishery are being made on another basis than the protection of fish stocks, and everyone has a right to know what that basis might be.