One of the most pleasant surprises I had while photographing Arn? Narn. was waking up to an iceberg right outside my Twillingate cabin window. It had not been there the evening before so it snuck up on me, if that’s possible with something so large and majestic.

The contrast of the white (and they’re not all white as many take on hues of blue, green, aquamarine and more,) against the sky is visually breathtaking. Imagine a stark white or colored ‘berg against a deep gray sky with a rich blue/black sea surrounding it. While the first time is always the best, subsequent viewings are not that much far behind in spectacle.

Tourists will often travel to Newfoundland just to hunt icebergs. The article which follows this illustrates that.

Note: Please keep in mind the article’s author’s use of “Newfie” is considered rude and in bad form. It is a pejorative term and does not necessarily convey affection for Newfoundlanders.

BTW, others hunt icebergs to thaw to make vodka and beer. Good stuff!

Hunting icebergs in Canada’s easternmost province is not as easy as it sounds, discovers David Bartram

They are giant hunks of ice travelling at less than a kilometre an hour but chasing icebergs is no easy business and, as we touch down in Deer Lake, it seems they may have already given us the slip.

“We haven’t had no ‘bergs in Twillingate for two weeks,” says an elderly gentleman from our flight, in an accent closer to Irish than Canadian. “Let me make some calls for you.”

Deer Lake is a town of barely 5,000 inhabitants in Canada’s easternmost province of Newfoundland and Labrador. From here it’s a five-hour drive to Twillingate, the “iceberg capital of the world”. It is the middle of the May to July iceberg season, the rental car is booked, the Google map printed out and we have a Twillingate B&B booked for the night. There is only one problem.

As the man makes his calls, the airport’s tourist information officer confirms that Twillingate has been dry for a while. Fortunately, though, Newfoundland is well set up to track down icebergs. Sightings from both satellites and a network of “iceberg ambassadors” are plotted on a website and tweeted in real-time. According to the map, St Anthony, on the northern tip of the island, is most promising. Our new friend, who appears to operate his own informal network of iceberg spotters, confirms that St Anthony is our best bet, so we adapt our plans and hit the road.

It’s a five-hour drive north along the Viking Trail to St Anthony. Some 500 years before Christopher Columbus sailed the ocean blue, Leif Erikson and a band of Vikings made landfall in this area, becoming the first Europeans known to have set foot in the Americas. You can see why there was no rush to follow them, though; this is a bleak and unforgiving place, but it does make for a breathtaking drive in a warm car. You could drive the entire 8,000 kilometres of the Trans-Canada highway to Victoria, British Columbia, with the help of a couple of ferries, without encountering anything as ruggedly beautiful. 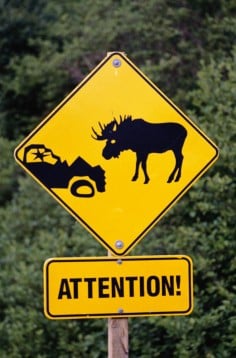 Gros Morne National Park is moose country, as evidenced by the bright yellow warning road signs we pass. In most of the signs, the moose towers above the car, as though to say drivers are going to come off at least as badly in any collision. One particular sign is more explicit: “Save a life,” it warns. “It could be yours.”

In St Anthony we are greeted by that most reassuringly Canadian of sights: a Tim Hortons coffee shop. Tim Hortons was set up in the 1960s by a former ice-hockey player and now sells six times more coffee than Starbucks in Canada. The St Anthony branch is selling special iceberg doughnuts.

“You’re just in time for the iceberg festival,” says the server.

“So there have been sightings?”

“Nothing yet but you should have seen them last year.”

As part of the town’s annual iceberg festival, the school in St Anthony is putting on a play. Also on offer are hiking tours and music in the evenings. But the reason we’re here, the actual icebergs, well … everyone’s still waiting on those.

The Fishing Point B&B is located at the top of the bay the town is built around. Donna, our host, greets us at the door. Newfoundland natives, or Newfies, have a reputation for being the friendliest people in Canada. Newfoundland has always felt separate from the rest of the country, having only joined the nation in 1949, when it ceased to be a British dominion. The flight from here to London is shorter than those to many Canadian cities. 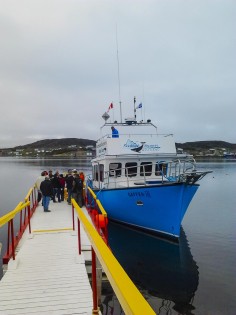 Donna, whose accent falls somewhere between Irish brogue and Queen’s English, shows us to our room, which has a panoramic view of the harbour. She suggests we watch the school play but we’ve had a long drive and want to be fresh for tomorrow’s iceberg hunt.

The following morning, Donna won’t let us out of the house on an empty stomach. The fisherman’s breakfast is a Newfie twist on a Canadian classic: pancakes with maple syrup topped with fresh crab legs. We’re initially sceptical of crab for breakfast but they are too fresh to turn down.

It’s a mild day but everyone else on our tour boat is kitted out in full winter clothing. Within a few minutes we find out why; out to sea, the temperature quickly drops by a good 10 degrees Celsius.

There are whales in these seas, says the captain, but there have been no sightings for the past few days. He does, however, have a lead on a berg.

In these parts, icebergs take on an almost spiritual significance. They represent purity but also the indomitable force of nature. It was in these waters that history’s most infamous iceberg sank the Titanic. The captain assures us that, if we do track one down, he’ll be keeping a safe distance. Our rickety vessel wouldn’t stand a chance.

By now we’re shivering from the cold, even inside the wheelhouse, where a number of passengers are sitting on wooden benches, listening to nautical folk ditties playing on the stereo. A local offers me his scarf. I’m too embarrassed to accept but he insists. I’m learning that it is hard to say no to Newfie hospitality. The captain is telling us how melted iceberg water is used to brew beer when the song My Heart Will Go On – by another Canadian, Celine Dion – begins to play over the speakers.

This is a signal. We rush out onto deck and there one is, easily bigger than our boat, blindingly white but also cut blue, shimmering majestically. The iceberg emanates an icy chill as we circle, and it seems as though the whole world has gone silent.

MISSION ACCOMPLISHED, WE return to Tim Hortons for a warming coffee, before hitting the road back to Deer Lake.

A couple of hours before we reach the airport, a moose wanders into the middle of the road. We stop and the beast glances at us, decidedly unimpressed, before returning into the hedgerow.

Not all Newfies are friendly, it seems.

Writer, author and photographer Bruce Meisterman is known for his non-fiction documentary book Arn? Narn. He has since turned to writing fiction. He has now turned to fiction with the completion of his new book, Jacob Will, 11.0: A Coward's Guide to Living. It could best be described as Homer's Odyssey meets Thelma and Louise, minus Louise. Most people start their mornings with a cup of coffee. Jacob Will's started with attending the funeral of his best friend. And in a letter left for him by the deceased, he was charged with getting his act together - big time. It would take him across the country into places he never thought of visiting, interacting with people for the first time in a genuine way, and finding and then losing love. View all posts by Bruce Meisterman